You are reading This Week @UN, summarizing the most pressing issues facing the organization. The information is gathered from UN press briefings, PassBlue reporting and other sources. This week, read about a Japanese development bank helping women through gender bonds.

Our participation in the nationwide NewsMatch campaign, in which contributions will be matched equally up to $1,000 each, continues until Dec. 31. Please give and make a difference in ensuring that democracy — through freedom of the press — flourishes for nonprofit news sites like PassBlue. We operate on a tight budget but produce fantastic news because we care deeply about what we do: holding powerful people and institutions accountable.

• PassBlue reported in last week’s summary that Deputy Secretary-General Amina Mohammed left New York City, her base, on Nov. 30 for a trip to Nigeria, where the UN spokesperson said she would “meet with senior government officials, the UN Global Compact corporate network and the UN team there.” She would discuss “a number of development issues, including acceleration of the Sustainable Development Goals and climate change,” the spokesperson said, adding, “We will share her activities as they go along.” Yet there are no mentions of her trip on her Twitter page as of Dec. 10. The only official business that could be found was a Dec. 6 tweet by a UN Development Program representative in Nigeria. Mohammed’s official UN website page says that Mohammed, who is Nigerian, “will also continue on annual leave 9-12 December” and return to UN headquarters on Dec. 12. She was on “official duty” from Nov. 30 until Dec. 8. “As usual, the costs of the private segment of this trip are being covered by the Deputy Secretary-General,” the UN said. The spokesperson’s office did not respond to a Dec. 10 request for a comment on Mohammed’s trip. — DULCIE LEIMBACH

• Gender Bonds Haven’t Been a Big Hit Globally, but a Japanese Bank May Change That: Catherine Morrison reports on a Japanese development bank issuing gender bonds, which could boost their popularity in supporting gender equality.

• Spokesperson’s briefing: The UN high commissioner for human rights, Michelle Bachelet, called for the release of Myanmar’s State Counselor Aung San Suu Kyi, who was sentenced to four years of imprisonment by a military court on Dec. 6. Her detention is “not only about arbitrary denial of her freedom,” Bachelet said, “it closes yet another door to political dialogue.” Relatedly, UN Secretary-General António Guterres repeated the call “for an immediate end to the violence and repression” in Myanmar and “condemns in the strongest terms yesterday’s killing and injuring of a number of unarmed civilians by security forces” in Yangon, where a military truck rammed into an anticoup protest, killing five people. Guterres’s spokesperson said that “more than 1,300 women, children and men have lost their lives in Myanmar” since the Feb. 1 coup.

• Stephanie Williams of the United States is named Guterres’s special adviser on Libya, based in Tripoli. “She will lead good offices and mediation efforts and engagements with Libyan regional and international stakeholders to pursue implementation of the three intra-Libyan dialogue tracks — political, security and economic — and support the holding of presidential and parliamentary elections in Libya,” on Dec. 24, the UN announcement read. She steps in after Jan Kubis, the UN special envoy for Libya, resigned suddenly. Williams was acting special representative and head of the UN mission in Libya, Unsmil, from 2020-2021. A recent podcast interviewing Williams, who has been living in southern France, reveals a frank discussion of Libya’s current travails and how other countries and mercenaries, including the Russian-based Wagner Group, are involved in the turmoil.

• George William Okoth-Obbo of Uganda is the new UN special adviser on the responsibility to protect, succeeding Karen Smith of South Africa.

• Spokesperson’s briefing: Pramila Patten, Guterres’s special representative on sexual violence in conflict, is “urging” Ethiopia to reach an agreement with the UN on preventing and responding to conflict-related sexual violence. She said “extreme brutality and sexual violence” are common in the restive region of Tigray and expressed “concern” over continued reports of sexual violence as a weapon of war, retaliation and humiliation.

• The Myanmar Accountability Project, a nonprofit group, submitted to the International Criminal Court, under Article 15 of the Rome Statute, evidence that Myanmar‘s coup leader, Senior Gen. Min Aung Hlaing, is guilty of crimes against humanity. MAP sent a criminal file to the ICC evidence of torture committed against a named individual and legal analysis to show that the use of torture in Myanmar is widespread, systematic and the result of statewide policies, thus reaching the threshold of crimes against humanity, as the UN special rapporteur on human rights in Myanmar, Tom Andrews, and senior UN officials have said.

MAP also submitted the testimony of a defector who we believe will make himself available to the ICC, showing that responsibility for the torture goes all the way up to the general himself. This corroborates the conclusions of the Independent Investigative Mechanism for Myanmar, established by the Human Rights Council in 2018, which has a list of named perpetrators of international crimes, focusing on those exercising effective control over them, including General Min Aung Hlaing.

The country’s democratically elected National Unity Government (NUG) has declared acceptance of the ICC’s jurisdiction and the UN General Assembly has voted by acclamation to reject the credentials of the junta and leave the current ambassador, who represents the NUG, in his seat. For some 55 million people in Myanmar, the ICC is the court of last resort. With more than 1,300 hundred people killed in Myanmar since the Feb. 1 coup and possibly many others facing a similar fate, ICC action is a matter of life and death. — Op-ed by Chris Gunness, director of the Myanmar Accountability Project

• Reform of the UN Development System Cries Out for Higher Goals: Max-Otto Baumann, a development expert with a German think tank, writes that assessments of the reform “paint a largely positive picture of the changes,” but a crucial element, empowering the UN resident coordinator system, lags.

• Spokesperson’s briefing: Seven Togolese UN peacekeepers were killed and three injured in central Mali when their armored vehicle hit an improvised explosive device, or IED. They were part of a logistics convoy, the UN said, traveling from Douentza to Sévaré. Guterres called on Malian authorities “to spare no effort in identifying the perpetrators of this attack.” An Egyptian peacekeeper also died on Dec. 6 of injuries from an attack in northern Mali last month, the UN added. Its peacekeeping mission in Mali, Minusma, has “suffered tremendously,” with Togolese, Chadian and Egyptian peacekeepers suffering the most, the UN spokesperson, Stéphane Dujarric, said to a reporter asking if the Togolese death toll on Dec. 8 was a record for Minusma.

• Weeks After a Cease-Fire Agreement, the Central African Republic Hangs By a Thread: Yujie Zhou delves into the Central African Republic’s increasingly precarious situation as an array of rebels and the government fight each other for control over territory. It’s a country rich in natural resources where innocent people are going hungry and have little to no basic health care services.

• Spokesperson’s briefing: The UN peacekeeping ministerial meeting, held in a hybrid format this week in Seoul, produced the following: 62 countries committed to “enhance the performance and impact of peacekeeping operations”; 36 committed to providing new military and police abilities; and 45 pledged to provide “training opportunities.” Other pledges included improving the peacekeepers’ technology and medical capacity, enhancing the role of women and improving the UN’s environmental footprint. The meeting occurred as seven peacekeepers were killed and three were injured in Mali on Dec. 8, riding in a UN armored vehicle that hit an IED. Linda Thomas-Greenfield, the US ambassador to the UN, participated in the ministerial meeting; she spoke to media on Dec. 9, saying that the US, which is the largest financial donor to UN peacekeeping, was “investing heavily in long-term capacity-building partnerships because we know that better trained, better equipped, and more capable troops and police are better at protecting themselves and the people they serve.”

• Spokesperson’s briefing: Catherine Russell, an adviser to President Joe Biden, has been appointed the new executive director of Unicef, succeeding Henrietta Fore, also an American. Russell, Dujarric said, has “decades of experience in developing innovative policy that empowers underserved communities around the world,” although no specific information was provided. She was an ambassador for global women’s issues during part of Obama’s presidency and has been working with Jill and Joe Biden for 30 years, the White House said, and was vice chair of the Biden-Harris campaign. Asked by a reporter why the position has been held by Americans for 74 years, Dujarric said, “There’s a consultation process, . . . and senior people get appointed.”

• Maria Ressa, the Filipina journalist who was awarded this year’s Nobel peace prize, said in her acceptance speech, among other things: “At the core of journalism is a code of honor. And mine is layered on different worlds — from how I grew up, the Golden Rule, what’s right and wrong; from college and the honor code I learned there; and my time as a reporter and the code of standards and ethics I learned and helped write. Add to that the Filipino idea of utang na loob — literally, the debt from within — at its best is a system of paying it forward.”

• The migrant death toll for the year — which is not quite over yet — has reached 4,470, with the final toll projected to be higher, says the International Organization for Migration.

• The Taliban released a special decree on women’s rights in Afghanistan, including that a “woman is not a property.” Yet the right of all girls to an education, particularly those at middle-school age, has not been totally honored since the Taliban took over the country on Aug. 15. 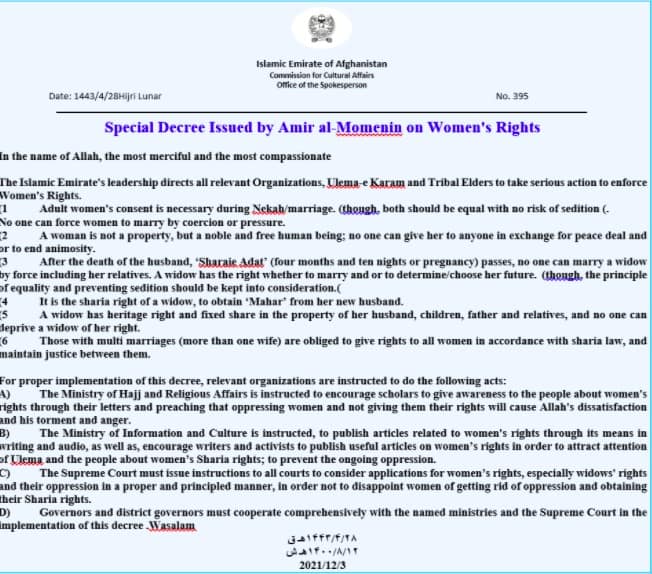 The reaction from the US to the decree:

• In Senegal, oyster fishing is not a hobby.