You are reading This Week @UN, summarizing the most pressing issues before the organization. The information is gathered from UN press briefings, PassBlue reporting and other sources. This week, catch up on PassBlue’s stories over the holidays, starting with how roadside bombs in Mali are killing more UN peacekeepers and about the high-level American UN official who sits on the board of Shell.

Our NewsMatch fund-raising campaign was a resounding success, and we thank all our donors for making a difference not only to our bottom line but also for supporting public-service journalism. We are also grateful to everyone who pitched in with the fund-raising, including the volunteer who offered his tireless technical help.

• Check out our news quiz on the Human Rights Council, of which the United States is a new member as of Jan. 1, 2022.

• Although it was not publicized, a senior policy adviser for UN Secretary-General António Guterres, Ana Maria Menéndez of Spain, departed from the UN at the end of 2021, “after the successful completion of her work,” Guterres’s spokesperson, Stéphane Dujarric, confirmed on Jan. 7. He added that the change is “part of a reshuffling of staff within the Secretary-General’s office which is not uncommon at the start of a second term.” In overseeing institutional policymaking, Menéndez had focused on internal gender-parity strategies, chaired the UN disability Covid-19 task force and advocated for the safety of journalists, among other matters. Her departure means there are now two fewer under secretaries-general who are women in Guterres’s inner circle, after his chef de cabinet, Maria Luiza Ribeiro Viotti of Brazil also left at the end of 2021. She is succeeded by Courtenay Rattray of Jamaica. — DULCIE LEIMBACH

• A Tribute to My Dear Friend at the UN, Whose Spirit for Justice Endures: Joseph Alfred Grinblat, a retired UN staffer and volunteer legal expert, pours his heart out for a colleague who died a year ago from cancer. Her life, he writes, could have been saved under different circumstances.

• The UN was officially closed. (Guterres returned to work in New York City on Jan. 4 after taking an annual leave, starting Dec. 22. He traveled to Lebanon officially from Dec. 19-22, but his travels page has not been updated.)

• In January, Norway Leads the Security Council Under a New Government: Stéphanie Fillion interviews Mona Juul, the UN envoy for Norway, on her country’s big goals for its monthlong presidency. Juul also discusses her role as a main facilitator in the momentous Oslo Accords, in the accompanying podcast (produced by Fillion and Kacie Candela).

• Spokesperson’s briefing: Guterres condemns “the continued violence targeting protestors” in Sudan, where Prime Minister Abdalla Hamdok resigned on Jan. 2, after mass protests in the country were held to push for a return to democracy following the Oct. 25 coup (and despite Hamdok’s being reinstated as prime minister). Guterres “regrets” the lack of “political understanding” on how the country can move ahead. A reporter asked who the UN special envoy (Volker Perthes) is meeting in Sudan and who the UN is “actually dealing with” given Hamdok’s departure. Dujarric replied that UN colleagues in Sudan have been “extremely active over the last 72 hours,” but did not provide details.

• Sexism and Violence Against Women MPs in Africa Is Pervasive, a New Report Reveals: Dawn Clancy debuts in PassBlue with a startling story on how ugly it can get for a woman politician to work — or even run for office — across Africa.

• Spokesperson’s briefing: More than three million Covid-19 vaccine doses arrived in Venezuela, with another two million arriving in Bolivia through Covax. Nearly 90 million doses have landed in 33 Latin American countries through the UN-related Pan-American Health Organization. A reporter asked if developing countries are receiving the best vaccines or “what [developed] countries don’t want.” Dujarric said that doses distributed by Covax “are all World Health Organization approved vaccines” and that “we have been hearing issues of vaccines that have been given bilaterally with dates that are close to [expiration],” but they are not being distributed through Covax.

• Spokesperson’s briefing: “Several contacts” have been made between UN officials and authorities in Kazakhstan, Dujarric said, where protests against rising fuel prices have turned deadly. The 101 international and 530 national staff “who fall under the UN security arrangements” in the country are safe; and Natalia Gherman, Guterres’s special representative to Central Asia, called Akan Rakhmetullin, the deputy foreign minister of Kazakhstan, in which she “reiterated appeals to exercise restraint, refrain from violence and promote dialogue,” Dujarric added. (Gherman has not tweeted on her page since 2017, and the UN Regional Center for Preventive Diplomacy for Central Asia, which she heads, has nothing about her call with the Kazakh official.) Commenting on the regional Collective Treaty Security Organization‘s announcement that it is sending Russian and other peacekeeping troops to Kazakhstan, Dujarric said that security forces “need to uphold the same human rights standards” and “protect people’s rights to demonstrate peacefully” regardless of whether they are Kazakh. (Update, Jan. 7: A reporter asked: Does the Secretary‑General have any comment on the order by the President of Kazakhstan to shoot to kill people he’s calling terrorists who appear to be protesters? Dujarric: “Look, we are continuing to follow the situation in Kazakhstan very closely and, again, appeal to all involved, to exercise restraint, to refrain from violence, and use peaceful means to address the situation. . .” He did not say whether Guterres has contacted the Kazakh president.

• Spokesperson’s briefing: The UN Office for the Coordination of Humanitarian Affairs and the UN Refugee Agency will launch two humanitarian appeals, one for Afghanistan and another for the region, in a virtual event livestreamed on UN Web TV, Jan. 11 at 11:30 A.M. CEST. More than half the Afghan population needs humanitarian help as do the thousands of Afghan refugees in neighboring countries.

Additionally, a statement from Guterres was released in the late afternoon, saying, “I welcome today’s release from prison in Ethiopia of numerous detainees, including key opposition figures. I call upon the parties to build on this significant confidence-building step by agreeing a cessation of hostilities and a lasting ceasefire, as well as launching a credible and inclusive national dialogue and reconciliation process. . . .”

Daniela Kroslak of Germany is the new deputy special representative for the UN peacekeeping mission in Mali, Minusma, succeeding Joanne Adamson of Britain.

Mourad Wahba of Egypt has been named the independent expert to lead the assessment mission of the mandate of the UN mission in Haiti, Binuh (as requested by Security Council Resolution 2600). He will travel to Haiti soon to meet with interlocutors and report back, as required.

We took a break from the newsletter during the holidays, but we kept publishing, so here’s a roundup of our stories since Dec. 17. We wish you all a healthy, joyous and prosperous 2022. 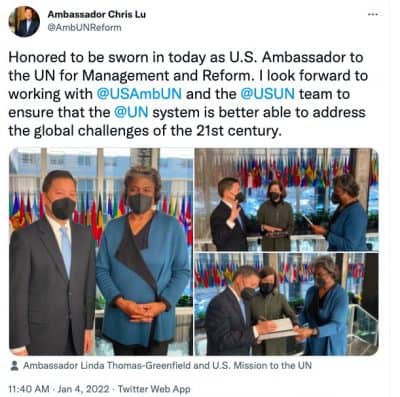 • “A Stunning Reminder of Nuclear Weapons from Survivors of Hiroshima and Nagasaki”: photo exhibition at the UN, organized by Nihon Hidankyo, Japan Confederation of A- and H-Bomb Sufferers Organization. (Information: kj3t-tnk@asahi-net.or.jp)

This summary was updated on Jan. 8 to include more details about the departure of Ana Maria Menéndez, senior policy adviser, from the UN.