Russia’s war on Ukraine escalates as at least one million people have fled.

You are reading This Week @UN, summarizing the most pressing issues before the organization. The information is gathered from UN press briefings, PassBlue reporting and other sources. This week, read how Russia’s attacks on Ukraine are playing out at the UN, about counting Ukraine’s displaced people and about the dubious start of the United Arab Emirates’ presidency of the Security Council in March.

• The Chin are not the Rohingya, but the flight of thousands of ethnic Chin people, a collection of subgroups from Chin state in Myanmar, bordering India, have become another minority under military attack. Their situation bears resemblance, on a much smaller scale, to the Rohingya’s plight. Both have lived with intolerance and societal violence for generations. The Rohingya, who are Muslim, and the Chin, who are predominantly Christian, are often in danger in the overwhelmingly Buddhist ethnic Burman heartland, home to 68 percent of the country’s 51 million people, according to a 2014 census. For the Chin, who are aligned with the political Burmese resistance (National Unity Government) and have armed themselves to fight the Feb.1, 2021 coup, retaliatory attacks by the Burmese army, the Tatmadaw, have been savage. The Indian online publication Outlook recently reported that about 20,000 Chin and others from neighboring areas in Myanmar’s northwest have fled into the border region of India. The New Zealand-Myanmar Ethics Council keeps data on refugees there. Lately, it has also been tracking the violent response of India when Chin try to flee across the border into India’s northeast. On Jan. 26, the United States, recognizing the sectarian dimension of the crisis, announced a program to promote “religious freedom, religion or belief in Burma” and opened competition to nongovernmental organizations to apply for project grants. At the same time, however, Senior General Min Aung Hlaing, who led the coup against Aung San Suu Kyi’s democratically elected government, pledged to build the biggest statue of Buddha in the world. — BARBARA CROSSETTE

Our new quiz is out, specializing in Women’s History Month. Written by Laura Kirkpatrick, it includes questions on peace-builders from the International Civil Society Action Network (ICAN) and is produced by John Penney. Dobryden!, as one American woman ambassador put it.

PassBlue has been working hard to keep up with developments in Russia’s invasion of Ukraine and how the UN is reacting each day. Please donate to our nonprofit, independent news site and help us keep our stellar reporting going. Follow us on Twitter as we update our page with information on Ukraine regularly.

• In another emergency special session of the Security Council, it met to adopt by procedural vote (no use of the veto) to approve the rarely invoked Uniting for Peace resolution, triggering an emergency session in the General Assembly on Ukraine. The Assembly met on Feb. 28-March 2, in which a marathon of speeches was delivered by approximately 120 countries, most supporting Ukraine. (See March 2.) The Council vote on Sunday’s resolution: 11 yes; 3 abstentions (China, India, United Arab Emirates); Russia, no.

• United Nations: The Last Thing Putin Wants: An essay by Mark Malloch-Brown, the president of Open Society Foundations and an ex-UN deputy secretary-general, writes that the General Assembly emergency session this week on Russia‘s incursion in Ukraine offers the members “a chance to make clear to Putin and autocrats across the world that we, the peoples of the United Nations, will continue to stand by the UN Charter, by international law and by the people of Ukraine. This is the moral power that only the UN can wield.” The essay shot to the top of PassBlue’s most-read stories of the week and the month.

• Spokesperson’s briefing: Secretary-General António Guterres told the General Assembly that the fighting in Ukraine “must stop now.” In response to President Putin’s announcing that Russian nuclear forces were on high alert, Guterres said that such actions were “simply inconceivable.” The UN Human Rights Office said that more than 400 civilian casualties have been reported, including 100-plus deaths, and that many more reported casualties are to be confirmed. [The numbers are rising significantly each day of the war, which started Feb. 24, local time.] The UN Refugee Agency said more than half a million Ukrainians have crossed international borders, mostly into Poland, and 160,000 have been internally displaced. [Update, March 4: the UN said 1.3 million people had fled Ukraine so far.] The World Food Program is leading the emergency telecommunications and logistics clusters in Kyiv and neighboring countries.

• Counting Ukraine’s Dead, Wounded, Refugees and Displaced So Far: Dr. Catherine Mullaly summarizes the vital data on the war’s humanitarian toll in its second week as numbers rise daily in Ukraine. She quotes Filippo Grandi of the UN Refugee Agency telling the Security Council on Feb. 28, “I have worked in refugee crisis for almost 40 years and I have rarely seen such an incredibly fast exodus of people.”

• Spokesperson’s briefing: The US mission to the UN has expelled a Russian male UN staffer suspected of being an “intelligence operative” — spy. Stéphane Dujarric, the UN spokesperson, did not reveal the employee’s identity but said the decision was “difficult to understand” because the person’s contract was ending on March 14. Dujarric declined to comment on whether the staffer was working directly with Guterres. [On Feb. 28, Russia’s UN envoy announced that 12 members of the Russian mission to the UN had been declared persona non grata by the US and must leave the country by March 7. March 5: Media reported that a Russian aircraft was flying to Washington to pick up Russian diplomats.]

• Estonia’s Leader Stands Out as She Grapples With the Current European Crisis: Barbara Crossette writes that in the 24-hour daily flow of reports about the war in Ukraine, the coverage is mostly about men. But numerous women leaders dealing with Russia’s invasion of a fellow European nation stand out, including Estonia’s prime minister.

• No noon briefing was held, but below are highlights of the final, third day of speeches in the General Assembly on Ukraine that began on Feb. 28:

¶ By more than two-thirds’ vote, the Assembly adopted a nonbinding resolution demanding Russia’s immediate end to its invasion of Ukraine and unconditional withdrawal of its military forces from the country, among other requirements. The spokesperson for the president of the Assembly (Abdulla Shahid) confirmed that there were no technical problems to explain why some countries didn’t vote, and that Venezuela did not have the right to do so because it has not paid its UN dues. Ninety-six countries co-sponsored the resolution.

¶ Guterres’s remarks to the media after the Assembly vote: “The message of the General Assembly is loud and clear: end hostilities in Ukraine — now; silence the guns — now; open the door to dialogue and diplomacy — now.” (He took no questions.)

¶ The International Crisis Group’s analysis of the voting by region. 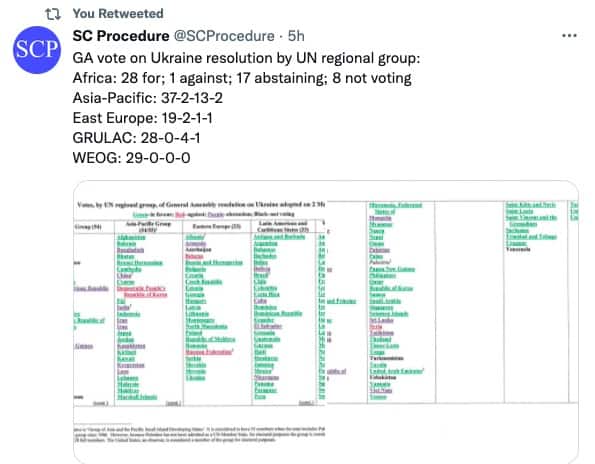 • After Abstaining on a Vote Condemning Russia’s Invasion, the UAE Leads the Security Council: Stéphanie Fillion interviews the UAE’s envoy, Lana Nusseibeh, about her country’s agenda for March, including its focus on the women, peace and security file and why the Gulf nation abstained on a crucial Council vote on Feb. 25, condemning Russia‘s assault on Ukraine. With an original podcast episode by Fillion and Kacie Candela, featuring Nusseibeh and a Mideast expert from Chatham House.

• Spokesperson’s briefing: “We do expect that more than 10 million people may flee their homes if violence continues” in Ukraine, Dujarric said. The Office of the High Commissioner for Human Rights recorded 802 civilian casualties in Ukraine so far, including 249 people killed, but warned that the “real toll is higher.” Dujarric said that Guterres was “shocked by the numerous reports of racism, harassment and discrimination that people of different races have been subjected to as they try to leave Ukraine.” [UN update, March 4: 351 dead, including 71 men, 41 women, 8 boys, 4 girls and 10 children and 217 adults whose sex was still unknown. The UN said most casualties were caused by explosive devices, though it did not identify who is using the weapons.]

• Could Belarus, a ‘100% Pariah Now,’ Lose Its Bid for a UN Security Council Seat? Dawn Clancy’s report, compiled over many weeks, examines how Belarus, a close European ally of Russia and staging ground for Russian troop advances into neighboring Ukraine, could lose its chance for a much-coveted Security Council seat in the 2024-25 term, no matter how far off that may seem.

• Spokesperson’s briefing: Russia and Ukraine tentatively agreed to arrange for safe passage of civilians out of combat zones in Ukraine, and Guterres discussed ways to ensure evacuations and delivery of humanitarian aid with Sergey Shoigu, the Russian defense minister. Dujarric said the UN had received reports of “relentless shelling” and severe infrastructure damage in many cities in Ukraine, preventing civilians’ access to crucial services and supplies, including food and medicine. The Security Council held an open meeting about reports of heavy fighting and fires around the Zaporizhzhia nuclear plant in Ukraine. Rafael Grossi, the head of the International Atomic Energy Agency, spoke to the Council by video link while traveling by plane to Teheran — possibly a first for a Council briefing. He said no nuclear reactors were hit in the battle. [Update, March 5: The cease-fire pause in Mariupol quickly collapsed.] A third round of talks between Russia and Ukraine, held on the border of Belarus and Ukraine, is scheduled for March 7, according to the Kyiv Independent.

• In Geneva, the Human Rights Council adopted a resolution to create a commission to investigate violations committed during Russia‘s military attack on Ukraine. Thirty-two countries voted yes;  Russia and Eritrea voted against it, and 13 nations abstained.

• Guterres spoke to Dmytro Kuleba, the foreign minister of Ukraine, and “expressed the commitment of the United Nations to scale up our humanitarian operations, both inside and outside” the country and the “conditions for the safe evacuation of civilians, including foreigners, from combat zones.”

• A podcast episode with Ellen Chesler, an American feminist, and Noeleen Heyzer, UN’s envoy for Myanmar, on gender equality in peacemaking, in time for International Women’s Day.