Combined with the growing fears of irreversible climate change and emerging new Covid-19 variants and subvariants, stands an ominous “third C”: conflict between Russia and Ukraine, which has triggered a refugee crisis on a scale not witnessed in Europe since the end of World War II. At the same time, civil wars in Africa and the Middle East continue to wreak human suffering and environmental damage.

Yet a once-in-a-generation opportunity to review and dramatically improve global tools for managing such enormous challenges — a Summit of the Future — is under serious consideration for September 2023 by the United Nations’ 193 member states. As recommended last September by UN Secretary-General António Guterres in his groundbreaking report, Our Common Agenda, the summit offers a unique opportunity to address the three Cs and related global challenges head-on.

The summit’s timely, ambitious agenda could, for starters, update the UN’s original, pioneering Agenda for Peace from 1992; recommend a global digital compact and a repurposed Trusteeship Council; and propose a special envoy and declaration on future generations, as well as a new head of a state-level UN-G20-World Bank-IMF platform for global economic governance. It could also redouble financing for development efforts by recommitting to the Addis Ababa Action Agenda.

Thematic consultations on Our Common Agenda, convened earlier this year by the president of the General Assembly, Abdulla Shahid, demonstrated varying degrees of support from UN member states for each of these potentially far-reaching recommendations. For such ideas to be ready for possible adoption at the September 2023 summit, work needs to begin now on all the agreed strategic priorities. There is simply no time to lose, especially given the deepening cracks across the international security landscape.

The president of the General Assembly could organize consultations with civil society and other nongovernmental parties to discuss new and related proposals on inclusive, networked multilateralism and to share these suggestions with UN member states. The consultations would provide innovative recommendations to better adapt the UN to current challenges. The ideas proposed would be effectively complemented by the research and deliberations of the secretary-general’s new High-Level Advisory Board on Effective Multilateralism.

The consultations with civil society representatives will inform and support the preparatory work during the 18 months remaining until the 2023 Summit, even if, as expected, the formal negotiations on its outcome document do not begin until early next year. This will be further reinforced by current efforts within the UN Secretariat to develop options for the new Agenda for Peace and the global digital compact.

Building on the active participation of experts from all regions in the thematic consultations, maximum transparency and full engagement of diverse voices will be critical to a successful summit. This entails ensuring that the intergovernmental negotiations welcome and deliberate on substantive inputs provided by nongovernmental organizations; opening formal negotiations to public observation; supporting national, regional and global forums in the run-up to the summit; and encouraging the involvement of civil society in the national delegations preparing for the summit.

Meaningful civil society engagement can reassure all stakeholders that decisions taken next year are well-informed, enjoy broad social ownership and generate a sense of co-responsibility in supporting their implementation. They can also help to dampen the current tense geopolitical climate and to overcome deep-seated differences between countries.

As a contribution to the September 2023 summit preparations, we were pleased to speak at the recent event, “Global Policy Dialogue on Global Governance Innovation: Beyond UN75 & Our Common Agenda,” which was organized by the Stimson Center, Academic Council on the UN System, Plataforma CIPÓ, Leiden University, Robert Bosch Stiftung, Global Challenges Foundation, Club de Madrid and Institute for Economics and Peace. And we shaped its forward-looking recommendations. Alongside other nongovernmental partners and like-minded countries, we hope to contribute to a high-ambition coalition for the summit.

Among Guterres’s most significant concepts in Our Common Agenda are his calls for a new social contract, the second World Social Summit and a new global deal. Representing a vision for rethinking relations between states and their citizens, the social contract brings universal human rights to the fore in articulating the duty of state institutions to protect and empower a country’s citizens.

The second World Social Summit and the new global deal will help to realize this vision by providing a framework for accelerating the success of the Sustainable Development Goals and other actions for a broad, green and just transition from the pandemic. These conceptual breakthroughs reflect an emerging agenda based on moral and ethical values and merit serious attention at the 2023 summit of the future.

Coping better with the three Cs and other global challenges will require new conceptual tools, policy frameworks and institutional reforms to adapt our aging but essential United Nations organization to the current crises. The Summit of the Future offers an opportunity to renew global governance and face the collective moral and practical imperatives of our time.

By designing a dynamic, inclusive process that brings together the ideas, networks and capabilities of a wide range of people and institutions — governments, civil society, the private sector and international organizations — the pact for the future will meet today’s most urgent needs and aspirations and leave both a livable and a peaceful planet to future generations. 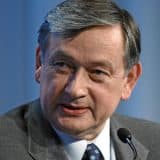 Danilo Turk, former President of Slovenia and UN Assistant Secretary-General for Political Affairs, is President of Club de Madrid and a member of the High-Level Advisory Board on Effective Multilateralism.

FOR NEW HORIZONS SPACE FOR PEACE AND COOPERATION : https://filmfreeway.com/projects/2476826

Thank you for this article. But please, please, PassBlue, call the war in Ukraine for what it really is – a “war”. I understand it doesn’t fit into the “three C” narrative neatly. But words do really matter.

This is a timely initiative which long been awaited. Yes there is a need to rethink the whole international order, it is not to invent a new international order but to review what went wrong on the obsolete international order … is caused by the international system, is the reforms of the international system does not work and why .. The SDGs are excellent framework to work on further adjustments / include their indicators , while global in their own rights, but to accelerate their achievements, Paris and Addis Ababa commitments need to be adjusted to the regional/ subregionalized goals and targets. The défendrions of régions and subregions should be further visited along a non-conventional criteria, and only geographic, nor income or economic growth levels / rates .. etc. An innovative nonconventional approach to achieve the SDGs need to be addressed .. Nature, climate and other factors are faster in wibbing humans than ever .. Let us not wait. We might find that there are many left behind before we reach 2030