Everything about Montagu’s Gusto is unexpected, from its name and the size and sweep of its menu to its location, on a nondescript stretch of Second Avenue near 35th Street, sandwiched between a reflexology salon and a Chinese takeout bizarrely named Profit.

The menu’s breadth aside, this modest spot (14 minutes by foot from the United Nations Secretariat building) worships the sandwich in all its glory. Dozens of variations, built with good ingredients on nearly a dozen breads from top New York City bakeries, are on offer, and customers are invited to tweak at will. Go ahead and order, for example, slow-cooked pork with broccoli rabe on a crusty ciabatta roll — with pickles.

“Eat Well, Live Well, Salad Well . . . Organic, Sustainable, Local” a sign in the salad area reads, while the board over the open kitchen boasts that its creations are “artisan.” A sidewalk sandwich board claims “Only Nature Grown Ingredients” while the smart black shirts worn by staffers urge customers to “Gusto Well.”

Some of this is poetic license, though Gusto owner’s, Andres Montes, says many of the salad ingredients are organic and he goes out of his way to buy local.

Montagu’s opened five years ago, after Montes and his wife, Holanda, cased the east end of Murray Hill, found it wanting in lunch spots and figured they could put their food-delivery expertise to good work. (He’s from Uruguay, she’s from Ecuador; they fell in love while toiling in a Jersey deli and now have three kids.)

Business was slow at first — not everyone knows that John Montagu, fourth earl of Sandwich, invented fork-free dining, or that “gusto” is Spanish for “taste.” But the place took off after a juicy closeup of one of their creations popped up on Instagram.

This is not your typical New York City deli. “My sandwiches are created from scratch, we don’t copy anybody,” Montes says. “Everybody tries to save money, but we try to make a nice sandwich on nice bread, made by hand” — with meats roasted in back and sliced and stacked to order on prestige-bakery bread. These are not small things in a world dominated by Boar’s Head, factory coleslaw and packaged egg whites.

Come summer, there will be tables and chairs out front, and there are a few seats in front of the shop as well. But everything is mostly plain and simple inside, geared for takeout and delivery.

At first glance, it looks like Salad City, with a pleasant chop-chop-chop sound emanating from the front-facing fixings bar and greens and every build-your-own add-on you can imagine being tossed with any number of dressings (fig-tahini, anyone?).

For those not in the mood to compose their own, there are house salads: Ultimate Cobb, Nice to Greek You — groaner names are a house specialty — even one called the Skinny Buffalo. (Since you ask: fried marinated chicken, romaine, celery, carrot shreds, blue cheese and ranch-style dressing.) For a satisfying chomp-down texture and zesty taste, we recommend the Rainbow Spicy Thai: zucchini noodles strewn with sweet mango, mellow avocado, spicy arugula, red and green peppers, green onion and lively cilantro dressing (if you don’t want jalapeños, just say so).

Oh, and rice bowls. Plus a soup du jour.

But sandwiches reign, as creative use of sliced bread is having a New York moment. We were touched during one recent visit to see a husky cop stoically watching his weight at the salad bar rather than train his sights on the meat-and-cheese monster subs underway at the next counter.

The choices, mostly in the $10 to $15 range, include house standards, like the Avocado, the Tuna and the Skirt Steak. But why make it easy when you can make it extra-extra? Turn your attention to the oversized specialty sandwich menu, where you will find inventive concoctions like the Dear Emma — house-corned short ribs with kimchi, broccoli rabe and honey sriracha on a “softy” roll — and Gruyère Toasties: grilled cheese with caramelized onions and mushrooms on sourdough.

The hefty Habana Cuba is a masterwork of “confited” pork — house made, complete with crispy bits –succulent ham, oozy cheese and tart pickles layered on a ciabatta roll by the sandwich-kingdom equivalent of an Italian mason. Like the weighty Uncle Vinny, packed with aged prosciutto, brie, apple and arugula, it can serve two, as can the off-the-menu Frank Sinatra, an eye-popping vision of Italian cured meats and cheese topped with lettuce, oil and vinegar.

Customize any sandwich, including all-day breakfast options, by choosing from among wraps and more than a dozen breads, including focaccia, most from Balthazar and Sullivan Bakery. Montes declined to disclose his secret sources for locally made bagels and soft rolls.

We sampled the Skirt Steak, concluding that the generous cut of the meat worked against the interests-of-mouth feel: Ideally, a sandwich’s interior should yield to a quick bite. But we’d return for My Favorite Reuben, reeled in by its generously sliced house-prepared turkey, its Swiss cheese and its sauerkraut, tenderly held together by Orwasher’s rye.

Several of the sandwiches, including the Reuben, could do with a bit more bite, maybe more sauerkraut, vinegar, mustard or raw onion. It can be hard to strike the perfect balance, but like a lot of fast food, the right sandwich strives to pit melting softness with bad-ass crustiness, its contents accented by extras and condiments to yield a whole greater than its parts.

Gusto’s regulars do not live by sandwiches alone. The friendly staff would like to see you, or your favorite delivery service, for all meals. The breakfast menu is inviting, though we would not necessarily recommend a wrap involving scrambled egg whites and sliced chicken. Darned if that’s not an espresso machine, loaded with a custom Lavazza blend. Or whisk home a solid entree like grilled salmon with one of the many sides. Desserts include brownies and cookies, including the requisite black-and-whites.

Montagu’s Gusto has an online ordering system, at mgustonyc.com. We found it a challenge, partly because there’s a host of rival delivery services handling the orders and offering different choices and deals.

More fun is swinging by in person. Keep in mind that while Montagu’s is amply staffed, it’s a challenge to move everything along quickly. If you find yourself wondering why your next meal is in a holding pattern, be glad that made-to-order hot sandwiches are thoughtfully wrapped to stay warm in transit. Take a deep breath and repeat “ar-tee-son.”

Montagu’s rewards cash payments with a 10 percent discount. Frequent munchers are invited to buy annual memberships in exchange for free delivery and additional discounts based on a membership fee. For a 25 percent discount on all orders, for example, you can buy a $100 annual enrollment.

That’s a lot of sandwich.

Reading Debbie and Irwin’s reviews is pretty close to tasting the food – and makes you look forward to visiting each place they describe. The cherry on top of Passblue’s much appreciated information –

Warm Your Hands in Front of the Shawarma 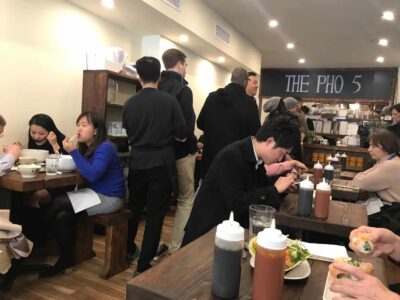