Invisible in Afghanistan and Forgotten by the International Community?

Over the last 20 years, the United States and other global powers pumped money and military aid into Afghanistan, only to see it disappear when militarism proved untenable and ineffective. Now, as Afghanistan endures a state of emergency, those same global powers offer sympathy for the people of our country without taking responsibility for their roles in our fate. The international community must act swiftly and decisively to hold the Taliban accountable or learn the human cost for inaction. The Taliban’s despotic regime has left Afghan women with no place in our own country.

Before the Afghan government collapsed in August of 2021, I served in the country’s foreign ministry. Today, exiled from my home, I witness the Taliban’s systematic erasure of Afghan women and girls. The Taliban says that former officials are welcome to return to Afghanistan, but Afghan women know the unsaid caveat that this return is for men only. What would I return to?

Over the last two decades in my country, a whole generation of women, myself included, was beginning to occupy more space in political and social spheres. Now, after the Taliban’s takeover, women’s power and agency have all but disappeared as Afghan women live under gender apartheid. Like thousands of women who were the breadwinners for their families, I lost my job and was left with no source of income.

Despite the deteriorating state of women’s autonomy in Afghanistan, the Taliban continue to make rhetorical commitments to women’s rights in a desperate bid for international respect and recognition. Here lies an opportunity for the global community to intervene. This week, the United Nations Human Rights Council begins its 50th session during which Michelle Bachelet, the high commissioner for human rights, is scheduled to give an update on the situation in Afghanistan followed by an interactive dialogue. (Bachelet, whose term ends Aug. 31, announced on June 13 she was not seeking a second term.)

Despite the June session’s traditional focus on women’s rights, no debate has been scheduled on the issue and no country has introduced a resolution addressing the dismantling of Afghan women’s fundamental human rights.

Active solidarity with Afghan women requires the Human Rights Council to take this dire situation more seriously and pass a strong resolution condemning the gross violation of women’s rights in Afghanistan and marshaling its various special procedures — including the Working Group on Discrimination Against Women and Girls and the special rapporteur on violence against women — to take action. The most recent schedule for this session does not even include an update from the special rapporteur on the situation of human rights in Afghanistan, Richard Bennett, who recently visited the country.

Here in New York City, the UN Security Council is scheduled to meet on June 23 to consider the status of sanctions against those Taliban members who are temporarily exempted from the travel ban. The goal is to lift the ban to promote constructive political dialogue with the Taliban, but there is no dialogue happening. This exemption should be rescinded until the Taliban demonstrate through meaningful action that it respects the rights of women and is willing to engage in a political discussion with them and with a broader, more inclusive representation of the Afghan people.

By making the travel exemptions conditional on demonstrated progress, Taliban officials are less likely to renege on their commitments, such as their broken promise to allow all Afghan girls to return to school. Afghanistan is the only country in the world to explicitly prohibit girls from attending school past the age of 12. The Taliban’s systematic exclusion of Afghan women cannot be tolerated by the Security Council.

In 2000, the Council recognized the essential role of women in preventing and resolving conflicts when its members adopted Resolution 1325. Does this resolution not extend to Afghan women? In renewing the mandate of the UN political mission in Afghanistan (Unama) earlier this year, the entire Council adopted strong language calling for human-rights monitoring and promoting political dialogue as well as the provision of humanitarian aid. But the focus of Unama has been much more on humanitarian aid than on human rights and political dialogue. And while such aid is critical, human rights and political dialogue are of equally critical importance for long-term peace and stability in Afghanistan.

Secretary-General António Guterres should go to Afghanistan to move the political agenda forward, taking with him a high-level delegation of women to demonstrate his commitment to Resolution 1325. The UN should also make more effort to hire Afghan women in the country. The consequences of failure are great not only in terms of fundamental human rights but also in terms of regional and international security. It has been documented that the status of women correlates to less violence and greater peace in any country, including in Afghanistan. We certainly know this from history. Those who do not learn from history are condemned to repeat it.

We have endured countless cycles of war in Afghanistan. Women are vital to peace and security, and we urgently need the strong support of the international community to keep women from becoming further invisible in my country. 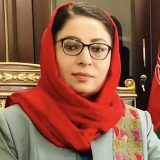 Asila Wardak is a former Afghan diplomat who served as minister counselor at the Afghan mission to the United Nations. She is a member of the Independent Human Rights Commission of the Organization of Islamic Cooperation and formerly was also a member of the High Peace Council and worked with various UN agencies and the World Bank in Afghanistan. Currently, she is a fellow at Harvard University and serves on the steering committee of the Women’s Forum on Afghanistan.

Invisible in Afghanistan and Forgotten by the International Community?