First came the bid this year for the International Telecommunication Union director-general position. Now the United States has set its sights on clinching the top job at the International Organization for Migration (IOM) after its candidate, Amy Pope, officially launched her campaign in Geneva on Tuesday.

Currently, the IOM’s deputy director-general for management and reform, Pope worked for many years for the US government, including as a prosecutor on human-trafficking cases and in the White House working on disaster response.

If elected, she would be the first woman — like Doreen Bogdan Martin, the newly elected chief at the ITU, and Ngozi Okonjo-Iweala, appointed to the World Trade Organization last year — to lead the Geneva organization since it was founded in 1951.

The only catch is that the organization’s current director-general, the Portuguese António Vitorino, has not confirmed whether he plans to step down or run for a second term in office, as has often been the case with his predecessors.

A spokesperson for the IOM said Vitorino “will communicate his intentions in due course.” The election will take place at a special session of IOM’s Council in June 2023.

Speaking at a press briefing on Oct. 11, Pope said: “Migration is at a pivotal point. We’re seeing record numbers of people being displaced. But we also know that moving forward, with the confluence of climate change, instability, with poverty and with the lack of opportunity . . . that migration is going to become more and more important of an issue.”

She said it was “critical” that the IOM “starts to think much more strategically about how we address the issue [of migration] but also that we use the tools that we have much more effectively — getting in front of what could be a crisis, but also an opportunity.”


We welcome your comments on this article.  What are your thoughts on the US pushing its own candidate? 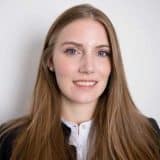 Editor in Chief at Geneva Solutions

Kasmira Jefford is editor in chief of Geneva Solutions and editor of Sustainable Business & Finance. She was previously a producer and reporter for CNNMoney Switzerland and spent 10 years in London working for such publications as City AM, CoStar News and The Sunday Times.