This week, we focus on climate commitments made at the just-concluded COP27 as well as the UN Environment Program honoring activists.

You are reading This Week @UN, summarizing the most pressing issues before the organization. The information is gathered from UN press briefings, PassBlue reporting and other sources. This week, the UN Secretary-General António Guterres re-emphasized the agreement at COP27 and his deputy traveled to her home country.

• We thank all our donors for making this year’s News Match fund-raising campaign reason to celebrate so far. For every $1,000 that is donated, it is equally matched, up to $15,000 in total. Your gift makes the difficult possible, such as PassBlue’s staff reporter Damilola Banjo’s investigation this month and its wider geopolitical implications. She explains why she wrote this story: “Kaduna State has always been the pulse for Muslim and Christian pressures in Nigeria. Whenever there is religious tension nationally, it often manifests as violence in the northwestern state. In 2011, however, the violence became part of a bigger crisis of herder-farmer clashes and spread to other states, scaring farmers from their land and worsening the food security situation not only in Nigeria, the continent’s most-populous nation, but also elsewhere in the region.” Please donate.

• Have you tested your knowledge of women in politics through our new quiz? Give it a try!

• How to Move From Hostility to Cooperation in the UN Security Council: A cursory look at the most important body in the UN, painting a glaring picture of a divided house. Countries are aligned along narrow lines of national interests — often at the expense of human rights. Tapio Kanninen and Heikki Talvitie write how the Council can begin to move from the split and embrace the unity of purpose, despite Russia‘s war in Ukraine.

• Spokesperson’s briefing: As COP27, the UN’s climate conference in Egypt, ended, Guterres “welcomed” the decision to establish a loss and damage fund to rebuild the “broken trust” in climate action, he said. He also urged well-off countries to honor their promise of “$100 billion a year in climate finance for developing countries.” Ibon International, a Filipino civil society organization, called the fund “an important initial step at bringing justice to billions of peoples, particularly in the global South, enduring extreme droughts, supertyphoons, floods, and sea level rise.” Guterres also emphasized “the need for a Climate Solidarity Pact in which all countries make an extra effort to reduce emissions this decade, in line with the 1.5-degree goal.” That call was not achieved by the end of COP27, on Nov. 20. (See recap below.)

• Mohamed Ag Ayoya of Mali was named deputy special representative for the UN peacekeeping mission in the Central African Republic (Minusca) and UN resident coordinator there. He will also serve as humanitarian coordinator.

• Will the General Assembly and the Human Rights Council Send a Strong Message to Iran?: The death of a 22-year-old Iranian woman who was allegedly beaten into a coma by Iran‘s “morality police” for not wearing a “proper hijab” has led to an uprising that has lasted for about two months. Kourosh Ziabari, an Iranian journalist, writes about the pressure from certain UN bodies to push the Iranian government to do the right thing. [Update: On Nov. 24, the Geneva-based Human Rights Council voted to approve a German-Icelandic resolution (below) to investigate rights abuses, particularly against women and children, in Iran. German Foreign Minister Annalena Baerbock’s speech, below] 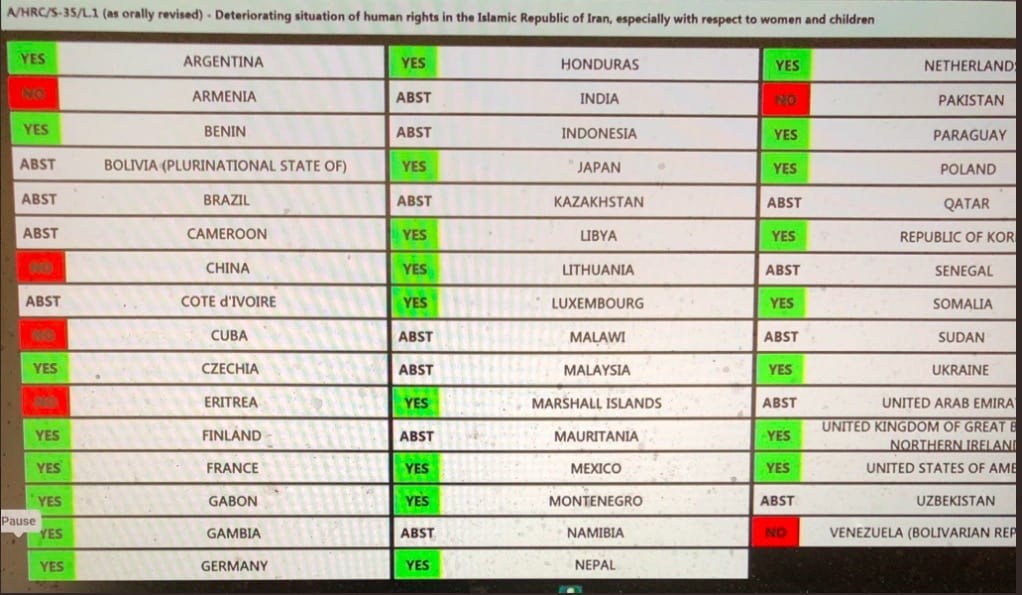 • Spokesperson’s briefing: The Nairobi-based UN Environment Program honored numerous people from different fields for their role in preventing, halting and reversing “ecosystem degradation.” These awards are part of the annual Champions of the Earth celebration. According to the spokesperson, “the award has recognized 111 laureates: 26 world leaders, 69 individuals, and 16 organizations” since its inception in 2005.

This is historic & it’s so meaningful that #Germany’s foreign minister was present in person at @UN_HRC: “We are now proposing that an independent & impartial @UN mechanism be established to investigate these human rights violations” in #Iran.
pic.twitter.com/98wq2kzKgC

• As part of UN General Assembly President Csaba Korosi’s effort to do more outreach with New York City, the UN’s host city, he met with survivors of domestic violence and gender-based violence at the Manhattan Family Justice Center. This is one of five borough-based service centers providing free, confidential social services for survivors and their children. Korosi was joined by Commissioner Cecile Noel from the Mayor’s Office to End Domestic and Gender Based Violence; Commissioner Edward Mermelstein from the Mayor’s Office for International Affairs; and Jacqui Ebanks, executive director of the NYC Commission on Gender Equity. The visit was timed for the global 16-day campaign to end gender-based violence, which begins Nov. 25.

• Navi Pillay, Who Leads a UN Rights Probe on Palestine and Israel, Hits Back on Slurs Against Her: The former South African judge, advocate and former UN high commissioner for human rights has accused the Israeli ambassador of smearing her name and that of her commission during a presentation of the group’s report on Palestine and Israel. Dulcie Leimbach, PassBlue’s editor and publisher, dived into the details of the complaint letter written by Pillay to the president of the General Assembly, Csaba Korosi. The story popped to No. 1 on PassBlue’s most-read list this week and it has been reposted by Geneva Solutions.

• Spokesperson’s briefing: UN Deputy Secretary-General Amina Mohammed is traveling to Nigeria to be the keynote speaker at the 2022 conference of the Institute of Directors, an event “attended by captains of industry and directors in both private and public sectors of the Nigerian economy,” it website says. She is also planning to “undertake a series of meetings on the UN’s partnership with Nigeria,” the UN said. Deputy spokesperson Farhan Haq also said that Mohammed is taking a personal “short leave” following her official engagement in the West African country, returning to New York City on Dec. 8. Mohammed, a native of Nigeria and one-time minister of environment there, is expected to have meetings with UN partners, “including senior Government officials, the UN country team and youth representatives.” She will return to New York City on Dec. 8, Haq added. However, it is unclear if the extension of the visit to her home country will be paid for by the UN. When PassBlue asked Haq for clarification, he said: “The UN pays for official travel. We don’t disclose details of air travel.” — DAMILOLA BANJO, reporting from Lagos

• UN Women released a report on gender-related killings of women and girls, or “femicide.” In 2021, it says that an estimated 45,000 women and girls were murdered by “intimate partners or other family members,” meaning that more than five women and girls die every hour worldwide by someone they know.

• To mark the 16 days of activism to end violence against women, or #16Days, Global Women Leaders released a letter saying that to end such abuse, the world needs more women in positions of power. The letter accompanies a new study by the organization finding that more women in parliaments leads to more laws to prevent and stop violence against women. (Summary.) Susana Malcorra, a former UN top executive, explains in her essay for PassBlue.

• The UN was closed for Thanksgiving.

• No spokesperson’s briefing was held.

• Beatrice Fihn, executive director of the Geneva-based International Campaign to Abolish Nuclear Weapons, is stepping down at the end of January 2023. The Swede and her organization won the Nobel Peace Prize in 2017.

• The National Unity Government, or NUG party in exile, in Myanmar, has opened an office in Washington.

• Ray Bouchefra, a reporter based at the UN who worked for Sky News Arabia, has a new job reporting for Alhurra News in Florida. He will be sorely missed in New York City by everyone who got to know his insights and humor while spending hours upon hours at the Security Council media stakeout.

• Brenden Varma, an American, has been named deputy director of the UN in Washington office.


We welcome your comments on this article..  What are your thoughts on this week's news?

Damilola Banjo is a staff reporter for PassBlue. She has a master’s of science degree from the Columbia University Graduate School of Journalism and a B.A. in communications and language arts from the University of Ibadan, Nigeria. She has worked as a producer for NPR’s WAFE station in Charlotte, N.C.; for the BBC as an investigative journalist; and as a staff investigative reporter for Sahara Reporters Media.