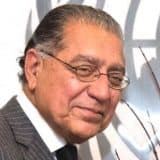 The Jammu and Kashmir dispute is one of the oldest unresolved issues on the agenda of the United Nations Security Council. At the heart of the dispute is India’s illegal occupation and persistent refusal to allow the people of…